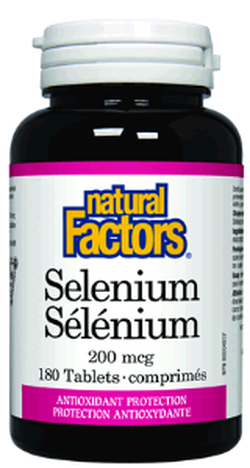 SELENIUM
Selenium is a trace element that’s been shown to be a very potent anti-carcinogen and anti-mutagen.
The best source is seafood as it is fast disappearing from intensively farmed soils. It is toxic in extremely high doses (2.5-3 g/day! – i.e. at levels some 1000 times greater than any reasonable supplement level); however, normal supplement levels (200 micro grams/day) are considered perfectly safe. As part of a cancer treatment diet, 500 micro-grams – 1 mg can be suggested.

A potent antioxidant, selenium is an integral part of the body natural antioxidant glutathione peroxidase system and, at times in partnership with Vitamin E, protects against cancer and prevents lipid peroxidation. Selenium is an effective detoxifier of heavy metals, its antioxidant properties protect against environmental and chemical sensitivities, and its immune functions enhance the body’s antibacterial and antiviral defenses. Selenium is also a natural anti-inflammatory agent.

Perhaps the most potent anti-disease effects of selenium are its ability to prevent and treat cancer. Selenium has prevented and reversed spontaneous, chemically-induced, and transplanted tumors in a wide variety of animal studies. Large epidemiological studies have confirmed the activity of selenium in the field of cancer prevention, and several clinical trials have produced highly encouraging results.

In China, a trial of selenium as a means of preventing viral hepatitis B associated with liver cancer, significantly reduced the incidence of both these diseases. The addition of very small amounts of selenium to kitchen salt led to the reduced incidence of several forms of cancer. Selenium at a dose of several hundred micrograms a day is now being used as an adjuvant to breast cancer therapy and shows promise as a treatment for immuno-deficiency diseases.

Some of the mechanisms suggested for this anti-cancer activity include changes in prostaglandin synthesis and selenium’s antioxidant and glutathione peroxidase properties.